Starting November 24th the latest collection of Moto x Pure  Edition will be available. I have a Moto X Pure and must say it gets my vote for one of the best phones I’ve ever used. #Phonelove!

Designer Jonathon Adler has partnered with Motorola and  designed a  gorgeous limited edition group of Moto X devices with stunning color and textures usually seen in fashion.The  21 mp camera and 4K digital quality is impeccably clear. Having a front facing 5 mp camera allows for the best selfies. As with the previous editions the unlocked feature is continued. You can easily go from T-mobile to Verizon and back. 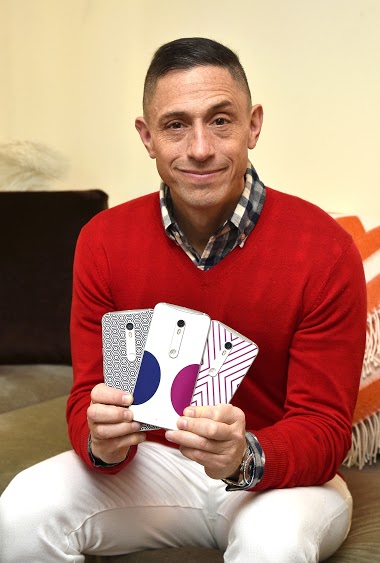 At the Motorola press day I had chance to ask Jonathan the phones.One of his favorite features is not surprisingly the 21 mp camera. ” It take the best photos”.
All of the designs are inspired by pottery prints from his collections. He mentioned that even though he has expanded into a lifestyle home empire he still sees himself as a Potter first.

The Jonathan Adler MOTO X Pure is gift idea to consider for that person who has impeccable style, a trendsetter ,the individual or that creative on your team.

I wanted to know which of these three pottery inspired works of fashionable art devices he’d pair with some of our favorite celeb divas.

All three of  Jonathan Adler devices have a distinct personality from classy chic to popping color.

I asked Jonathan which Moto 360 he’d gift  three of the hottest women in entertainment for the holidays . Here’s his picks.

Find out more about Moto XPure Editions designed by Jonathan Adler via motorola.com

Bonus : Pair the  Moto X with the wearable  Moto 360 Fashion time piece. The new Moto 360 Fashion collection is for men and women. I’m heading to Moto Maker to test out the design features, colors and textures. Moto Maker enables access to the worlds first fully customizable wearable android watch. Track your fitness levels , workout , meals , listen to music , uber,  and keep up on text messages and emails. It’s has limitless functions. With Spotify listen to your workout music without the phone. Cheers!